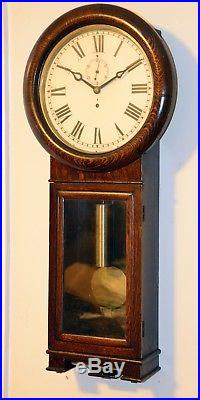 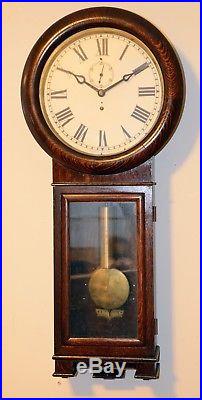 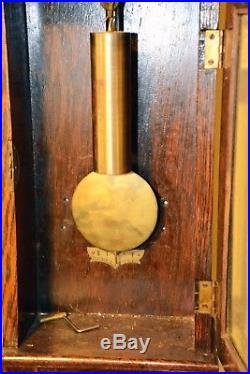 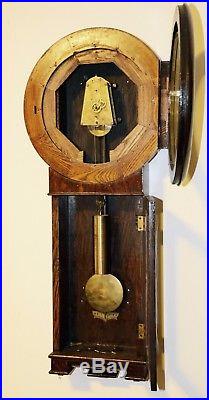 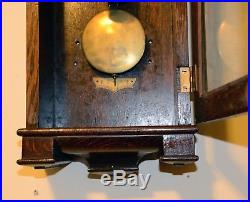 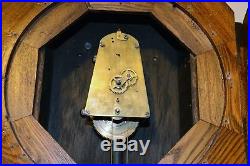 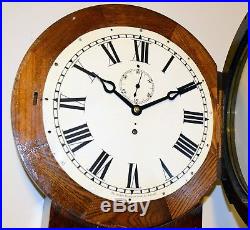 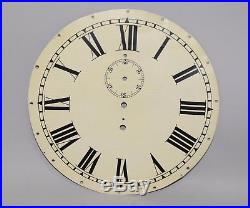 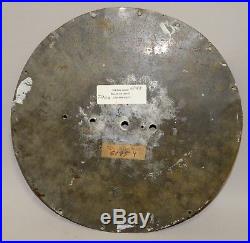 Rare Arthur Pequegnat Regulator No. 8-day time only weight driven regulator wall clock. Clock is patterned after the Seth Thomas No. 2 Regulator of which many were made. This clock, however is rare. This is the second one I have seen in 45 years of clock collecting. I bought it for my collection 15 years ago, and have loved it every day. Now it’s time to pass it on to someone who will love it too. The case is tiger oak, and is in very nice condition. It looks to me like it has it’s original finish. The signed brass time only movement runs and looks to be in good shape, but could use a cleaning and servicing. The dial was flaking badly when I got the clock, and I sent it out to the Dial House to restore it, and they did a great job. The dial was made of thin zinc with a shiny surface which did not hold the paint well. There is a hole between the second bit and the XII, the purpose of which I don’t know. The hand are original and are the distinctive Pequegnat hands. As far as I know, other than the dial surface, the clock is all original. 35″ tall, 15-1/2″ wide, 11 dial. A fantastic clock for the advanced collector. I will accept reasonable offers for this clock. A little history of the company: The Arthur Pequegnat clock company had an illustrious albeit short life. Watchmaker Arthur Pequegnat was born in Switzerland in 1851. Arthur immigrated to Berlin, Ontario Canada in 1874 with his wife, parents, brothers and sisters; a grand total of 18 family members. By the late 1870s Arthur was operating a jewelry store and watch repair in Southern Ontario. By the middle 1880s Arthur and his brother Paul were operating a shop in Berlin, Ontario. After about ten years the brothers went their own way, both operating successful jewelry shops in Southern Ontario. In 1897 Arthur expanded his Berlin Jewelry shop to include the manufacture of Bicycles. However, By 1904, with the decrease in the demand for Bicycles, Arthur began to re-focus on the clock industry, by manufacturing his own clock movements at his Berlin Bicycle Manufacturing plant. At first the wooden clock cases were made by local Furniture Makers, however in time he manufactured his own clock cases. Its interesting to note that Berlin, Ontario was re-named Kitchener Ontario in 1916, due to anti-German backlash during WW I. This becomes a use-full tool when dating Pequegnat clocks as Labels, Movements or Dials marked Berlin date the clock to 1916 or earlier and those marked Kitchener are 1916 or later. Having said that, many clocks had a long production life and it is difficult to date any Arthur Pequegnat clock precisely. Arthur died in 1927, however, with family members in control, the company continued to operate until 1941. The war effort meant that brass became difficult to obtain and so with that the company closed its doors. The factory never produced another clock, and was later demolished in 1964. This photo was taken at the Canadian Clock Museum. In Deep River Ontario in 2013. It was then that my love affair with the Regulator #1 was born. The Canadian Clock museum contains the largest collection of Arthur Pequegnat clocks in Canada and it is certainly worth a visit. The item “Rare Arthur Pequegnat Regulator No. 1. Antique Canadian Clock” is in sale since Saturday, November 18, 2017. This item is in the category “Collectibles\Clocks\Antique (Pre-1930)\Wall”. The seller is “old-fezziwig” and is located in Winnsboro, South Carolina. This item can be shipped to United States, Canada.