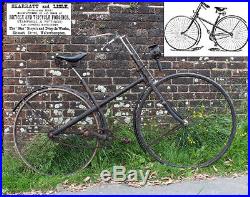 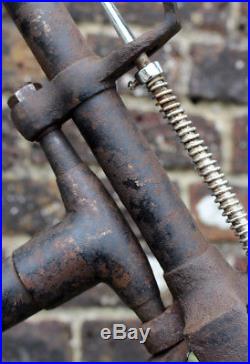 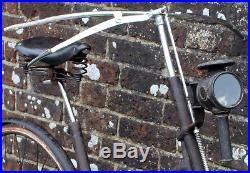 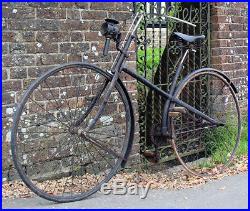 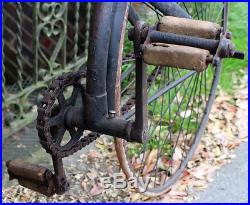 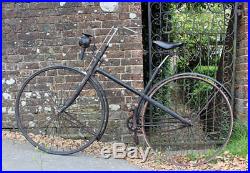 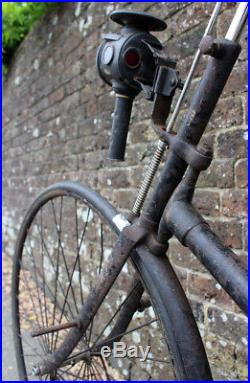 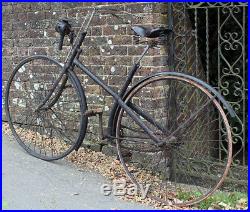 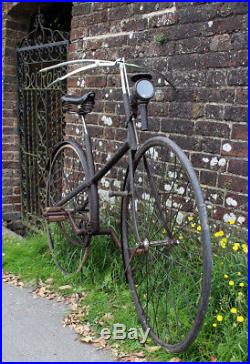 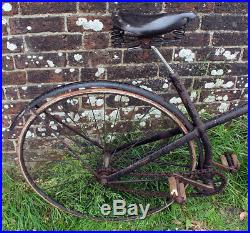 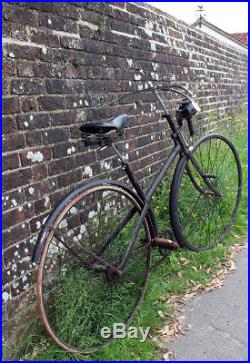 WELCOME TO GROOVYDUBBER’S. Over the next month, I’ll advertise lots of superb vintage bicycles. And will consider serious offers on any of them. 1888 CROSS FRAME SAFETY BICYCLE. Good Original Unrestored Cosmetics. Open head, Solid tyres. This solid tyre crossframe safety – believed to have been made by Sharratt & Lisle (see below) – recently came out of decades of dry storage. In the 1980s the owner had the handlebar and seat post chromed. The saddle is newer. The frame and working parts of this bicycle are in unrestored original condition and an inspection of the steering head indicates that the machine has had little use. The mudguards are also in excellent condition, whereas they are normally battered on a surviving bicycle of this era. The original pedals are worn (I would replace with good working condition replica safety bike pedals if required). The rims and hubs are matching; the front tyre is slightly wider than the rear. The rear wheel is in excellent condition, while the front rim has had a repair sometime in its life and one spoke is loose. The front wheel is just about rideable as is, though if you were going to use it seriously, the front wheel should be rebuilt and solid tyre fitted (easily available). A partnership formed in 1876 by Edward Lisle and Edwin John Sharratt. Edward Lisle already had premises at Moorfields, Wolverhampton, but new premises were secured in Pountney Street, Wolverhampton, and later in Stewart Street. Sharratt also formed a partnership with a Mr Parker and produced’Connaught’ bicycles from the Pountney Street premises. Star’ high- wheelers were produced from c. In 1883 the Star Cycle Co. (Sharratt and Lisle) Ltd was formed. The partnership was dissolved when Sharratt left to trade on his own account. Sharratt & Lisle was wound up in 1895 although machines continued to be advertised as Sharratt & Lisle until 1896 with the address as Stewart Street, Wolverhampton. In 1896 the Star Cycle Co. Ltd was formed by way of name change from the Star Cycle Co. (Sharratt and Lisle) Ltd and traded from the Stewart Street premises. Frame 10,317 was produced in 1895. STAR CYCLE Co Ltd. (Sharratt and Lisle) Ltd and trading as Sharratt and Lisle. The works were in Stewart Street, Wolverhampton, Staffordshire. The company made some Pedersen machines under licence from the Dursley Pedersen Cycle Co. In the same year the Presto Gear Case Co. Ltd was formed by the Lisle family. This made bicycle chaincases which were easily opened and removed by withdrawing two screws. By 1897 the Star company employed some 400 workers and by 1898 production was running at 9-10,000 a year. In that year the chief machines built were the’Star’ path racer,’Star’ road racer,’Star’ light roadster, popular’Star’, single and double steering tandems, the lady’s’Star’, the lady’s popular’Star’ and youth’s’Star’. These are fitted with Dunlop, Clincher, Warwick, or Beeston tyres; saddles of standard make, and’Presto’ chaincases. It is known that the firm made machines for other firms in 1898 such as for Walton. King was the company secretary in 1898. There was also a lady’s model for 16 guineas. In 1905 four grades of’Star’ were offered. The machine was lined in burnished gold. The equipment included a ball-bearing free-wheel and also a two speed gear if desired. The brakes were now operated by a neat arrangement of revolving levers on the handlebar. The rear rim brake is also placed high up, and supported from the back forks, instead of from the chain stays. Possessed many of the features of its more expensive brother. The inverted lever brakes were retained on this machine, which was fitted with Dunlop tyres and Westwood plated rims. Which weighed about 30lb. With a choice of tyres between Warwick’s and Clipper’s. In 1905 a deep depression started in the bicycle trade. There was strong competition from German and American imports and sales were lost to the new motorcycle and car producers. Although sales improved a little over the next few years, Star decided to end cycle production in 1909 to concentrate on powered vehicles. Frame number 35,000 would be approximately October 1897 (it seems that the numbering continued from Sharratt and Lisle). I think most of you know how I operate by now. I try my best to provide a friendly professional service, with good condition vehicles. Original literature is available to download for free from the website. OWNER: The Online Bicycle Museum. The item “1888 SHARRATT & LISLE CROSS FRAME SAFETY BIKE Original Vintage Antique Bicycle X” is in sale since Friday, August 10, 2018. This item is in the category “Collectables\Transportation Collectables\Bicycle\Other Bicycle”. The seller is “groovydubber” and is located in Brighton. This item can be shipped worldwide.