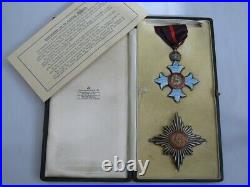 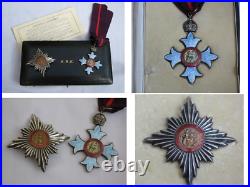 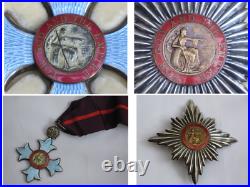 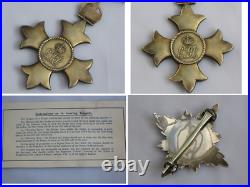 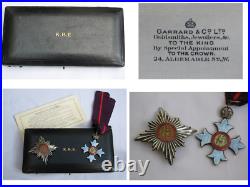 British Military Collectables, Royal Memorabilia. Century to the present Day. Preserving the past for the future. Knight Commander of the Order of the British Empire K. A wonderful Opportunity to obtain a 100% Original Full Size WWI Knights Commander of the Order of the British Empire 1. Type on Silk military neck Ribbon, Silver Breast Star with Original Presentation Case of Issue made by Royal Silversmith makers of the time Garrard of London and issued during World War I. The KBE set is made of Sterling Silver Neck Badge with silver gilt enamel, the Breast Star is Silver, gilt and enamel. The set is in superb finishing as you can see from the photos, the guilloche enamel is in excellent condition with the inner circle in red finished enamel with block lettering in gold For God and the Empire. To the centre Britannia again finished in gold gilt. The medal still retains the , Original military silk purple water fleck ribbon is in super condition. To the top front of medal we see the Royal Crown, still prominent and present. The medal comes with its presentation case and instructions of how to wear card, the case has block letters in gold KBE, stamped Garrard appointment to the King and Crown. Press to release catch which is in perfect working order. The medal has beautiful aged toning and has never been cleaned. This one is for the collector or investor of solid silver medals or Royal Regalia. A real investment for the future. The Medal would have been personally presented by the King himself. These are a higher award than the MBE and OBEs and CBEs and extremely collectable. Are the makers of the Crown Jewells which are housed in the Tower of London, also Garrard are credited for. Such pieces as the Queen Mary Crown used for the Coronation, the Imperial Crown of India worn by King George V and the famous Koh-i-Noor diamond which was made for the Queen Mother. Robert Garrard II Silverware is avidly more collected as they received the Royal Warrant under his production which makes them more desirable than the earlier Garrards silver, to this date Garrards still produce silver for the British Royal Family. Most of Garrards silver are to be found in museums or private collections around the world. Hallmarks: No KBEs are hallmarked however they are made of Solid Sterling Silver and produced by Garrard of London. Size of medal from Top of Crown with ring to bottom: 85mm high x 64mm wide. Condition: The medal is in superb condition. Light surface marks consistent with age and genuine wear. All in all a wonderful piece with no knocks or dents. A real collectors piece. Very hard to find WWI KBEs That are 100% and NOT copies. Please see photos to judge for yourself. Maybe a gift for someone special, birthdays , christenings , all occasions, for your own collection maybe. Or pieces of historic. The item “Knight Commander of the Order of the British Empire K. B. E. WWI Knighthood” is in sale since Saturday, March 27, 2021. This item is in the category “Collectables\Militaria\World War I (1914-1918)\Other World War I Militaria”. The seller is “churchillantiques” and is located in london, London. This item can be shipped worldwide.