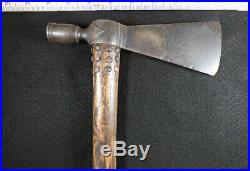 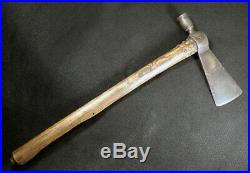 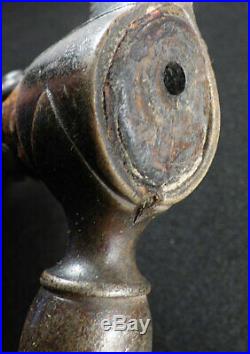 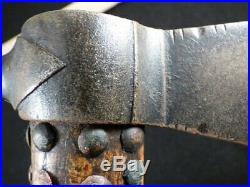 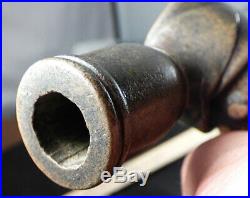 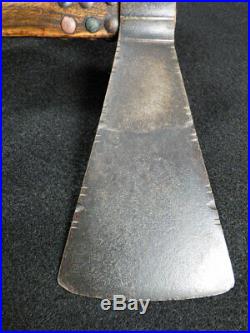 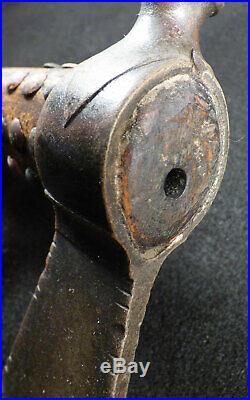 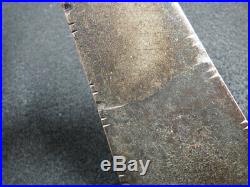 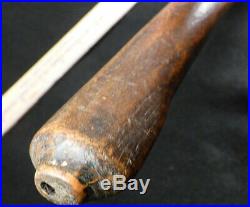 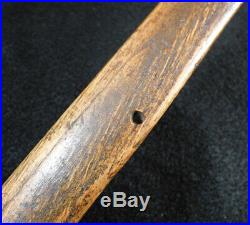 Authentic original 1780’s Sioux Indian pipe tomahawk. This example has a highly sought after forged head that was originally a gun barrel. You can clearly see rifle marks inside the bowl. The iron head has a nice “in the metal” patina and shows good use and wear patterns. The head was forged from a gun barrel and there is a nice lap weld seen as pictured. The haft is probably ash, single shoulder hole, and several old brass tacks. The mouth hole is well worn and intact. The head of the tomahawk is almost exactly 8 inches long. Haft is 16.75 long. This is a fine example of a Native American weapon of war and peace pipe in one. If you have a question, please ask. Good luck and God bless the USA! In the early days, even in well-settled areas, iron was expensive. On the frontier the costs of transportation increased the price even. Guns received rough usage and scrap gun barrels became an. Important source of iron. The tomahawk maker was quick to take. Advantage of the cylindrical shape. A drill was not. Necessary for there was already a hole for the bowl, and no dif. Ficult welding was required. After the tube was necked down for. The shank, it was flattened all the length from the shank to its far. A slit was then cut and opened with a drift to form the eye. Sometimes a steel bit was welded to the cutting edge. The bowl made in this manner was long, like the catlinite pipe. Bowls of the Plains Indians. The eye was merely spread at the. Middle and drifted to a diamond cross-section with rounded. The blade had nearly straight edges front and back and. Since this shape did not lend itself to use in combat, it was usually. Such tomahawks are readily identified by the funnel-like. Opening which, with the handle removed, may be seen under the. Sometimes traces of the original rifling of the gun barrel can be. Seen on either side of the eye or bowl. The item “Authentic 1780’s sioux indian pipe tomahawk gun barrel head + forged lap weld” is in sale since Thursday, April 18, 2019. This item is in the category “Collectibles\Cultures & Ethnicities\Native American\ US\1800-1934\Weapons”. The seller is “rickrestored” and is located in Harrison, Tennessee. This item can be shipped worldwide.