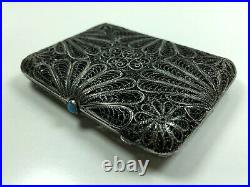 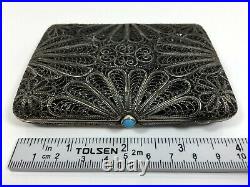 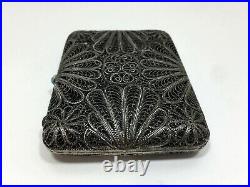 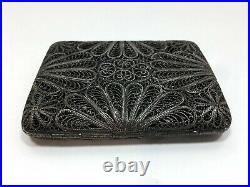 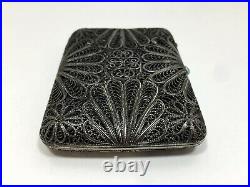 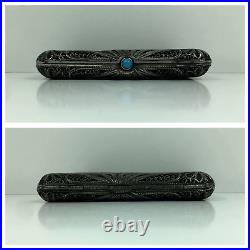 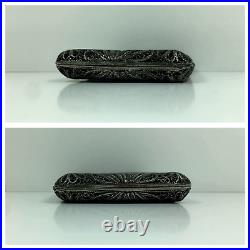 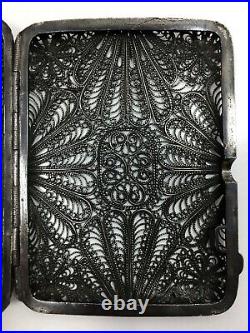 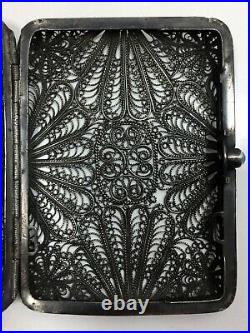 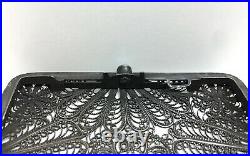 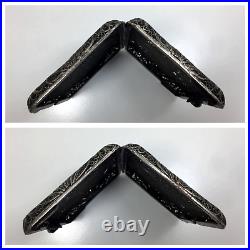 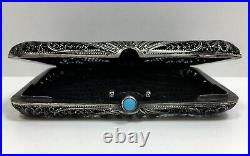 Antique Russian filigree silvered cigarette case 170g. The history of the cigarette case dates back to the XIX century. In Russian, the word “cigarette case”, as well as the word” cigarette”, appears from the middle of the last century. Cigarette cases are beginning to enter firmly into use and later become widespread, which, apparently, contributes to the development of industrial production of cigarettes. In the XVIIIXIX centuries, items with scanting were produced in many art centers in Russia. Both large works of art and small items (vases, salt shakers, boxes) were created. Crystal and mother-of-pearl were used in production. Since the XIX century, industrial production has been established on a significant scale using various technologies. The factories produced dishes, Church utensils, and toiletries. During the Soviet period, the scan was widely used in the art industry products of the Krasnoselsky jewelry factory in the Kostroma region, the Mster art factory “Goldsmith” (since 1937) in the Vladimir region, the Yerevan jewelry factory, and many others. Along with jewelry, household items were made: openwork filigree vases, Cup holders, miniature sculptures, etc. Cigarette cases are flat cases-boxes-rectangular, less often square, often with rounded corners, double-leaf (sometimes with a hinged lid), with a latching lock. They can be made of a wide variety of materials: metals, including precious metals (gold, silver), wood, papier-mache, bone, horn, plastic, etc. Often the material is combined: on silver cigarette cases we see gold overlays, on products made of other materials (for example, plastic) there are parts made of silver. The inner surface of the doors of silver products is often gilded. The technique of making cigarette cases is also diverse. Along with stamping, masters use artistic techniques of metal processing chasing, engraving, scanning, and black. Products made of papier-mache and even silver are covered with multicolored paintings, bone cigarette cases are decorated with artistic carvings. In our country over their creation worked well-known masters of national crafts: “Severnaya chernya” (Veliky Ustyug), Kubachi (Dagestan), Palekh (Ivanovo region), bone carvers of the village of Lomonosovo (Arkhangelsk region), etc. Ornamental motifs are less influenced by time, although they are influenced by the trend of new artistic styles, for example, art Nouveau of the late XIX – early XX century. As for other visual elements, their character has undergone significant changes. If the stories on Russian-made cigarette cases of the late XIX – early XX century are mostly decorative (sometimes allegorical) in nature, then in the future there is a noticeable “politicization”, dictated by time, there are features of agitation. Thus, in the 1920s and 1930s, industrial compositions appeared on cigarette cases, images of factory buildings, tanks, planes, the Lenin Mausoleum, figures of a worker, a red army soldier, a peasant, as well as emblems: a five-pointed star, a hammer and sickle, etc. In the 1930s and 1940s, cigarette cases with portraits of I. This product is very old and has signs of aging. In case of unforeseen circumstances, do not rush to open a dispute, write to me, and I will begin to solve the problem. If you have any complaints, questions or concerns, I will be happy to answer them. The most valuable thing for me is your opinion and satisfaction, my reputation is also very important for me. Thank you for your understanding, waiting for your feedback! The item “Antique cigarette case Filigree vintage silver box Russia colections USSR set” is in sale since Friday, April 17, 2020. This item is in the category “Collectibles\Tobacciana\Cases”. The seller is “sagulatus” and is located in Europe. This item can be shipped worldwide.