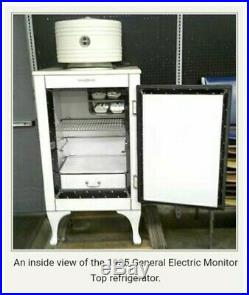 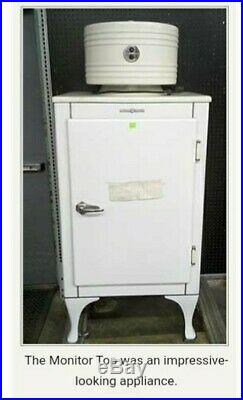 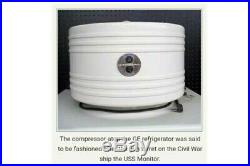 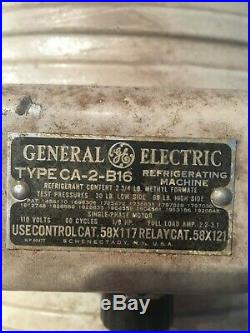 Vintage refrigerator is stylish in its oldness, impressive, and very clean-looking appliance. The refrigerator was a Monitor Top, and it was said to be one of GE’s most successful products. The Monitor Top was toppled from its perch by Sears. By the late 1930s, refrigerators were starting to lose their four feet and made flat to the floor. Cannot verify if currently in working condition or not as it was bought for a show piece in a coffee shop. GE has verified that they can maintenance the unit to have it in running order if needed. This is a CK model. Please note the model differences. The DR series from 1927 to 1932 is characterised by open copper tubing for the condenser, and uses Sulphur Dioxide (S02) for refrigerant. In 1933, GE released the CA series. In the late 1920’s, experiments had found methyl formate to be an efficient refrigerant with the advantage of being much safer and easier to handle than SO2. GE patented methyl formate as a refrigerant, and it was used in the new model. The CA was also the first model with a flat plate condenser. 1933 CA (form A type) 1934 CA (form B type). In mid 1934, the first CK models appeared. Resembling the later CA, it had reverted back to SO2 refrigerant; this being because methyl formate was found to be unstable, requiring some refrigerators to be purged of non condensable gases from time to time. The late 1930’s saw the availability of Freon (R12) developed by Thomas Midgley of Frigidaire (General Motors), and this eliminated SO2 for domestic refrigeration. The last rebuilt CK-3’s were filled with R12. By 1937, fashion changes saw the end of the Monitor Top styling, although the design lived on until 1942 in the form of the Flatop. First thing is to look at the top of the compressor. The CK (as does all its Scotch Yoke relatives) has a dimple at the top. The CA just has a smooth rounded top. If you can see the back of the fridge, the CA has the start relay on the back of the condenser. For the CK it’s in between the fins at the back. The charge valve for the CA is in between the fins at the top, whereas the CK has it pointing out at 45 degrees just under the fins. There are also other subtle differences, such as the evaporator. However, a possible trap is with the first CK3’s – they have the same shape dome, and relay on the condenser as the CA. But there was never a CA-3. Of course it’s only the CA form B that looks like a CK. The CA form A is totally unique in appearance. The foot pedal was also carried over to the CK, so it’s no indication as to model. It is also important to know that sometimes cooling units are not matched to their original cabinet. For example, you might see a CK cooling unit on an old DR cabinet. The cabinets actually have their own model number – which is the number used in sales brochures and advertising. For example what is advertised as an “X7″ could have either a CA-2 or CK-2 cooling unit on top. As to why CA’s appear to be common, they certainly are on this forum. That’s because they are prone to certain faults which the average fridge technician does not understand. Thus, they are the most common model being disposed of as faulty. Once understood they are actually very easy to work on. The later 1935-42 models using SO2 or F12 are seldom faulty. While the CK and CA look similar, internally there are differences, and operating conditions are quite different. Only the CA types use methyl formate. All other General Electric models up until 1942 use SO2 with the exception of a few CF’s and CK3 rebuilds which used Freon 12. The item “Antique 1930s General Electric monitor Top Refrigerator” is in sale since Thursday, March 19, 2020. This item is in the category “Collectibles\Kitchen & Home\Large Appliances”. The seller is “tsommerfield” and is located in Jim Thorpe, Pennsylvania. This item can’t be shipped, the buyer must pick up the item.