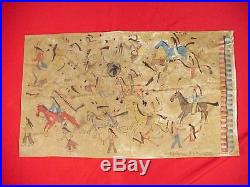 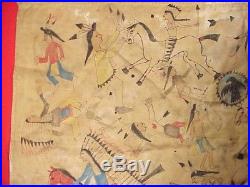 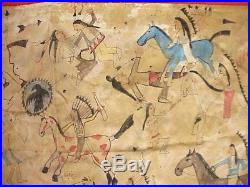 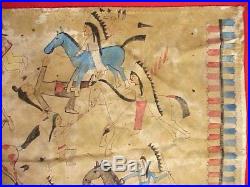 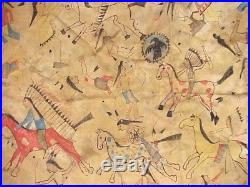 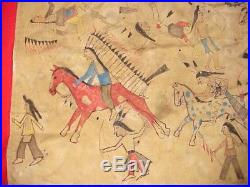 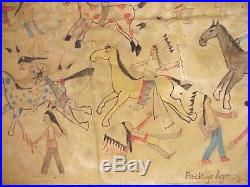 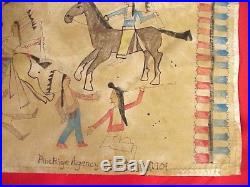 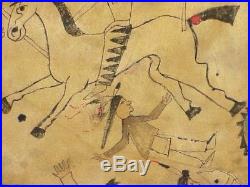 Native American Muslin LEDGER ART – SIOUX RESERVATION. Native American Muslin Ledger Art 35″ X 25-3/4″ using ink and water colors. This is a depiction of a battle among Native tribes. The ledger Art materials are considered the following materials; paper, canvas and muslin. The use of materials such as pencils, crayons, ink (fountain pens) and water color paints. The pictographic is of a battle scene between Native American war parties. I noticed in the center of the painting, there are some symbols. So I went on line and found a website talking about Native American symbols. The first one at the top of the muslin is a large arrow by itself. This arrow is used by a number of tribes having different meanings. So I will describe in general terms the meaning of the single arrow pointing right indicated protection and defense. Arrows also signified direction, force, movement, power and direction of travel. When an arrow pointed to the left it means warding off evil, pointing to the right means protection and an arrow pointing down means peace. The second symbol below the arrow is a raven. The raven is also believed to be a messenger of the spirit world. It is believed that ravens who fly high towards the heavens take prayers from the people to the spirit world and in turn, bring back messages from the spiritual realm. Below that is an Indian with a War Shield. This symbol is called the Hope Symbol. The eight point pointed star symbolizes hope and guidance. A circle around other Native American symbols signifies protection. The circle has no break and cannot be broken. The inner Star pointed in the Outer circle led to the summer solstice where the sun path would be at its farthest north, the days are longest. A time of renewal and great potential and hope for the future. The Winter solstice marking the onset of winter. The summer and winter equinox when day and night are of equal length. Each are important times in the forthcoming year and are symbols of hope for the future. The Hope Symbol of the eight pointed star therefore represents the four cardinal points of north, south, east and west and their connection to the outermost points on the horizon when the sun passes through the year – the solstice and equinox points. Condition: The muslin has age staining (See photos). To the left of the crow symbol there is an Indian on a horse with a lance, and an Indian laying under the horse where there is some separation about 1/2 inch in the cloth on his feathers. Listing and template services provided by inkFrog Open. The item “Native American Muslin LEDGER ART SIOUX RESERVATION” is in sale since Thursday, January 25, 2018. This item is in the category “Collectibles\Cultures & Ethnicities\Native American\ US\1800-1934\Other Nat. Am. Items 1800-1934″. The seller is “pahaskabooks” and is located in Canoga Park, California. This item can be shipped to United States.